On December 14, 2015 the passenger flow of OJSC “Air company “Belavia-Belarusian Airlines” has reached two million people for the first time in the company history. The two million passenger was determined during the registration of the regular flight № В2 868 Amsterdam-Minsk. It is Olga Gudtsova. The company made a surprise for the milestone passenger: the lady was met with the mexican air of the musical band “Mariachi” by the representatives of the air company and mass media at the airport.

“For the first time in 19 years of the air company work we have carried two million passengers in just under a year. Last few years “Belavia-Belarusian Airlines” has achieved these results steadily. This year the number of passengers is increased to 5,7 % in comparison with the results of the previous similar period of time. This year we rise beyond a million of carried passengers in July” – as clarified the director general of OJSC “Air company “Belavia-Belarusian Airlines” - Anatoliy Gusarov.

The growth of the passenger flow became possible due to the development of the destination network, the increase of the generation and the number of connecting passengers. Also the increase of the number of clients of the air company is determined by the expansion of the air park and systematic change for the hybrid model of transport management: at average the air fare was reduced to 20% during the current year. 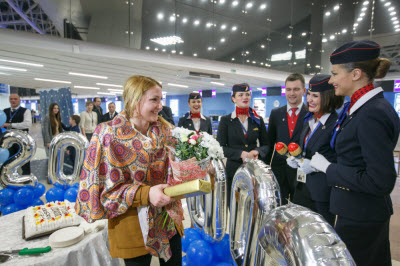