The Minister of Foreign Affairs of the Republic of Belarus, the lead vocalist of Lyapis-98 band, the participant of Kvartet I and others featured in this video.
August 21, 2019 - On the eve of the largest interactive entertainment festival in Europe “Wargaming Fest: Tanker’s Day” Wargaming in cooperation with Belavia shot a short film on how and why the new Tankolet was created.
The shooting was attended by Minister of Foreign Affairs of Belarus Vladimir Makei, Minister of Sports and Tourism Sergey Kovalchuk, actor Kamil Larin, musician Sergey Mikhalok, astronaut Oleg Artemyev, Belavia CEO Anatoly Gusarov, World of Tanks publishing director Maxim Chuvalov and others.
The mini-film tells how the most famous aircraft in Belarus was created step by step, as well as the transformation of the Tankolet into a “flying advertisement” not only of Wargaming and Belavia companies, but also of the country as a whole.
“The appearance of Tankolets became a significant event not only for our companies, but for the whole of Belarus,” says Maxim Chuvalov, publishing director of World of Tanks. “Many people are inextricably linking them with our country, and over time, these aircraft have turned into a flying brand of Belarus.”
“We constantly observe a huge interest in Tankolets, wherever they land,” says Anatoly Gusarov, the Director General of Belavia. “People take pictures in front of the Tankolet, share their pictures on social networks and, when ordering the tickets, they hope to fly on the Tankolet to Belarus.”
During three years, the first Tankolet managed to make 1,550 flights and visit airports in 28 countries, delivering 300,000 passengers to different locations across the globe.
The second Tankolet has made only 400 flights but that is just the beginning of its journey: it usually flies to Germany, France, Poland and, of course, to the Minsk National Airport, where it delivers passengers from other countries.
The Tankolet will deliver many guests to the upcoming festival "Wargaming Fest: Tanker’s Day” to be held in Minsk on September 15. It is expected that the festival will repeat the last year’s success and will be attended by more than 200 thousand people. Representatives of 28 countries, including exotic ones such as the United Arab Emirates, Hong Kong, Bahrain and Kuwait, have been invited to the increased comfort area at the festival "Wargaming Fest: Tanker’s Day”.
“We are waiting for everyone at the festival "Wargaming Fest: Tanker’s Day" in Belarus on September 15” and we wish you a pleasant flight on our Tankolets,” added Maxim Chuvalov.
Famous Ukrainian, Russian and Belarusian musicians such as Vopli Vidopliassova, Zveri and Krambambula will perform for the guests at the festival; and the highlight of the performance will be The Offspring that is a cult-favorite band from sunny California
The "Wargaming Fest: Tanker’s Day" will be held on September 15, 2019. It starts at 14:00. The entrance is free. 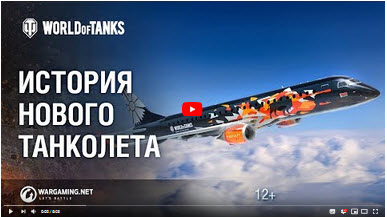